How to test alternator with multimeter?

When there is an issue with the electronic devices in the vehicle, the things that come to our mind are the battery and the alternator. The battery produces a direct current that moves electricity from the battery to the car. And the alternator produces an alternating type of current. It is actually the type of electricity that we have in our residence. These two things in the automobile are very essential to generate electricity to the different electrical parts including the lights, horn, entertainment system, and instrument panel.

The alternator converts the car engine's mechanical energy into electrical energy to recharge the battery and to run the electrical devices. When you experience an issue with the devices like the headlights or horn, you should check the condition of the alternator and the best way to check it with a multimeter or a voltmeter, Today in this article, I am going to tell you how to test alternator with multimeter or other devices.

Testing the alternator is essential

The alternator is a critical part of a modern vehicle's electrical and charging system. It recharges the battery when required so that it can work efficiently. It plays an important role to run the electrical devices. Many of us have already faced a difficult situation with dimmer headlights which was one of the worst situations at nighttime driving. Sometimes, we don't get enough power to the air conditioning unit or car's cabin heater. We can also face a problem with the entertainment system because of the unusual condition of the alternator.

So, you should check the alternator on a regular basis. It will make you confident that it can generate sufficient voltage to recharge the battery and operate the different electrical devices of the car to avoid unusual incidents.

How to test the car battery with a multimeter

It is also essential to test the car battery. A good car battery should register about 12.6 Volts. The multimeter will measure DC voltage, indicated with a solid line and a dashed line above a letter V. If you set the dial to 20, you will get accurate measurement between 0-20 Volts.

You will get terminals marked with + and -, and often color-coded red for positive and black for negative. Touch the red probe to the positive and black to the negative terminals. You will be able to understand whether you are right or wrong by reading. If there is a reading with a minus (-12.6 rather than 12.6), that means you have got the probes the wrong way round.

I have told you earlier that the ideal voltage of the car battery should not be lower than 12.6 V. When it goes down to 12.2 V, it is 50% charged, and below 12 V, we can call it discharged. If you experience the battery with less than 12.6 V charge, you should disconnect the battery and fully charge it. If it holds a charge when it is not connected to the car, something is draining the battery far faster than the computer memory and digital clock.

How to test alternator with multimeter

If you don't have a multimeter to test the alternator

In this situation, the best way to do it with a voltmeter. Though it is not a multi-purpose instrument, you can use it to do this job properly. The steps to follow- 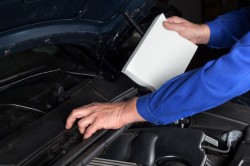 Solution of "Maintenance: Tire" warning of your Nissan Car