It can be seemed strange but it is a simple matter of stimulation. A series of actuators in the seat foam make constant micro-adjustments that simulate walking. It is known as pelvic.

According to WHO, more than 1.4 billion adults are at risk from a lack of physical activity which can lead to diseases like dementia, type 2 diabetes, obesity, weak pelvic, and back muscles problem as well as heart problem.

JLR says this technology can be very effective to reduce these health risks. This morphable seat is being tested by the company’s Body Interiors Research division. The actuation in the cushions could be tailored to the driver and passenger. If bodies feel like they're walking, instead of sitting, it could be better for overall health after long hours in a car seat.

It is part of an overall process to improve customer’s well-being. Other projects have studied ways to reduce motion sickness and use ultraviolet light to stop the spread of colds and flu, JLR added. But the company has not said if the morphable seat will be used in any of its cars. 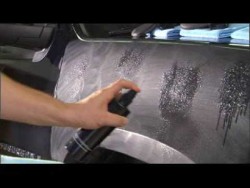 What Color is Transmission Fluid?

Solution of "Maintenance: Tire" warning of your Nissan Car