What are the symptoms of bad EGR valve?

The Exhaust Gas Recirculation (EGR) Valve is an essential thing in regulating exhaust emissions and a necessary component with strict emissions regulations in place. But sometimes it can't work properly and you need to know the signs of a faulty EGR valve. Today in this article, I am going to tell you what is EGR valve, how does it work, and the symptoms of bad EGR valve.

It is found in most gasoline and diesel engine that works to re-circulate the engine's emission by returning them to the combustion chamber rather than sending them to the exhaust emission system. It is very essential to reduce the temperatures of the cylinder and the number of emissions that get produced. The flow of the exhaust gases in your vehicle are mostly dependent on the EGR valve. It works in conjunction with the EGR system to pull this off. When the valve opens, emissions enter into the EGR system where they are controlled.

But when it becomes faulty, it can't open and close properly. As a result, the emissions increase rather than getting reduced. If you want to know whether it is faulty or not, you need to know the possible symptoms.

How does it work

The air outside the vehicle contains 20 percent Oxygen and 80 percent Nitrogen with some other minor elements which are picked up via the engine's intake manifold. When it combines with fuel and ignites inside the combustion chamber, the temperature rises and it can be up to 25000 F. Combustion burns inert gas nitrogen that results in oxide in nitrogen (NOx) which pollutes the air and affect on human health.

But the EGR valve works to send the exhaust gases back into the combustion chamber to reduce the temperature. It defends the formation of NOx. It facilitates the movement of gases in and out of the combustion chamber because it is designed to open and close when needed. When you start the vehicle, it stays in a closed position. After increasing speed, the engine reaches its operating temperature. Then the valve gradually opens. When you slow down the engine, the valve will close gradually.

The symptoms of bad EGR valve

The EGR valve has a great effect on your car engine. When it gets faulty, you will notice some differences in the performance of the engine. You will experience acceleration difficulties and an overall power reduction when you step on the gas pedal. This is a clear indication of a bad EGR valve. It happens because of the air and fuel ratio being out of whack. When it happens, the engine needs more fuel just to have any power at all. It creates the problem of a bad fuel economy as well as bad fuel efficiency. As a result, you need to spend more money on gas.

One of the most common symptoms of a bad EGR valve is getting the odor of fuel. I have told you earlier that when the engine becomes faulty, it will consume more fuel. Because of this unusual incident, more hydrocarbons are going to exit the tailpipe. As a result, you get the smell of fuel from the inside or outside of the vehicle. You know what, the smell can be harmful to your health and it can pollute the environment. So, it will be an incentive to address the EGR valve issue to be safe from the unhealthy smell.

You can diagnosis the problem of the EGR valve by the "check engine" warning light. When there is a problem with the EGR valve, the indicator will light up on the dashboard. It happens as soon as your vehicle's central computer detects that the valve is in a bad position.

I have told you earlier that the EGR valve knows when to open or close. If it does not close all the way or open all the way when needed, the computer will detect that something is wrong with it and then it will notify you.

This is another way to understand that there is a problem with the EGR valve. When there is a malfunctioning EGR valve, your vehicle engine will experience rough idling. You will see that the valve is getting stuck in a closed or open position. It means that too few or too many exhaust gases are entering into the chamber, and that's why the engine can't run smoothly.

In some states, the emission test is required every couple of years. If you are from one of them, you will have to face it. Then if you end up failing the test, there is something to worry about your EGR valve. A faulty valve will fail the test for sure. You might not be alerted of it during the test, but it is something to watch out for right away.

The solution to this problem

The possible solution to this problem is to replace the EGR valve. If you think to do it on your own, then I want to say that it is not an easy task at all. And my recommendation for you to go to a good mechanic for that. Another thing to tell you that the EGR valve is not so cheap. You will have to pay $200 to $500 dollar for the best result.

Finally, I have come to the end of my article. I have tried to tell you everything about an EGR valve, the way it works, the symptoms of a faulty EGR valve, and the possible solution to this problem. I hope you will be benefited from my article. 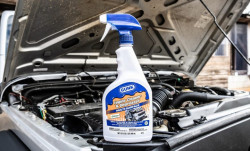 How does trailer brake controller work?